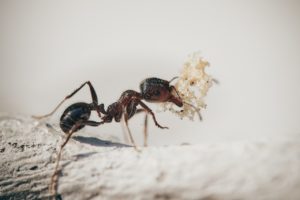 For most people, ants are seen as a minor annoyance. You get tired of having them crawl through your house, on your counters and into your sink, but they generally don’t gross you out. While it’s true, they aren’t as disgusting as flies, cockroaches and rodents, they aren’t always as harmless as you might think. It depends on whether you have a small ant or a carpenter ant.

What are Carpenter Ants?

Like the name denotes, carpenter ants like wood. More specifically, they like to chew on wood. Any wood will do, especially if it’s a bit softer. They won’t have a problem chewing on your home if it’s convenient. They are also happy to move right into your home if there is plenty of food and water – and wood.

These ants make their nests in soft wood. They chew through it and create tunnels where they will travel. They can cause a lot of damage to a house just like termites. Their favorite areas are along windows, under decks, under porches and along the eaves of the roof. Of course, they will be quite content anywhere where they can find soft wood.

Carpenter ants are dark, often with a hint of reddish brown. They are one of the largest species of ants and live in smaller colonies of about 2000 to 3000.

There are many types of ants other than carpenter ants. Most of them are smaller. Black ants are one of the most common and are black in color as their name indicates. They like to live in dirt and will create mounds on sidewalks, along driveways and in other areas for their nests. They are also willing to travel long distances into houses to find food. Black ants generally don’t move in though.

There is one queen in each colony, which can be between 4000 and 7000 worker ants. However, some colonies have been double that number.

Because of the size difference, carpenter ants are much easier to see in detail. Their heads are heart-shaped with small ants have a rounded head. You can easily see the different sections on the carpenter ant, which is more difficult when looking at the smaller ant, especially since they seldom sit still.

It’s also important to note that not all large ants are carpenter ants. Some other species can be larger and closer in size to the carpenter ant. However, they sill prefer to live outside and will go into homes only in search of food.